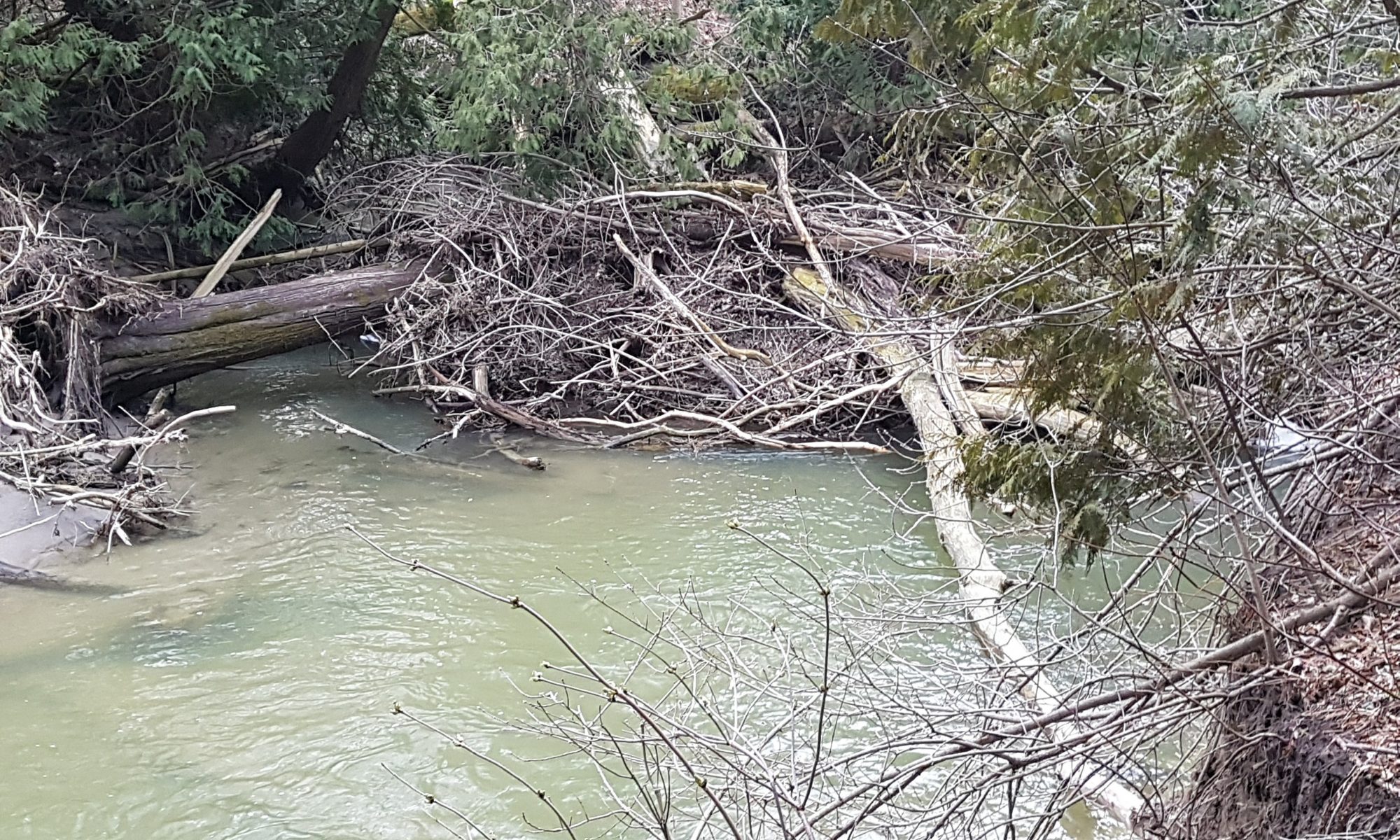 One of the things about living in Southern Ontario is that we get these long periods where the temperatures hang in the low single digits with overcast skies week after week.   We’re in one of these slumps right now.

A couple of days this week I managed to get down to the beach twice – once during the day and again in the evening.  On the 27th it was foggy.  You couldn’t see much looking across the bay so I didn’t bother posting a picture.

On the 29th I did my daily beach walk, but I decided to head out in the evening and walk down a tributary of the Nottawasaga River near our house.  The main part of the river is swollen this time of year and flowing pretty fast, but just a stream below.  I didn’t see any beavers, but lots of evidence they are active.

The picture below is pretty cool.  There was obviously some run-off that caused a steep bank to erode and collapse toward the river.  Note the tree down below that slid right down under the suspended fence.

We got a winter storm on March 30th that really didn’t amount to much, but this is the same day as Mom and Dad were arriving back from Florida so we were watching the road conditions.

Mom joined me on March 31st in the early afternoon for my daily walk down the beach.  She said this was a good reminder of why she and Dad go to Florida for the Winter!

April 1st was a beautiful day with the sun shining brightly.  I’m not sure, but this might be the first seagull I’ve seen this year.  As sure sign that Spring is on the way.

Looking across the bay.  We have open water in close to shore now but still layers of ice to on the lake.  You can see there is still snow on the ski hills at Blue Mountain below. 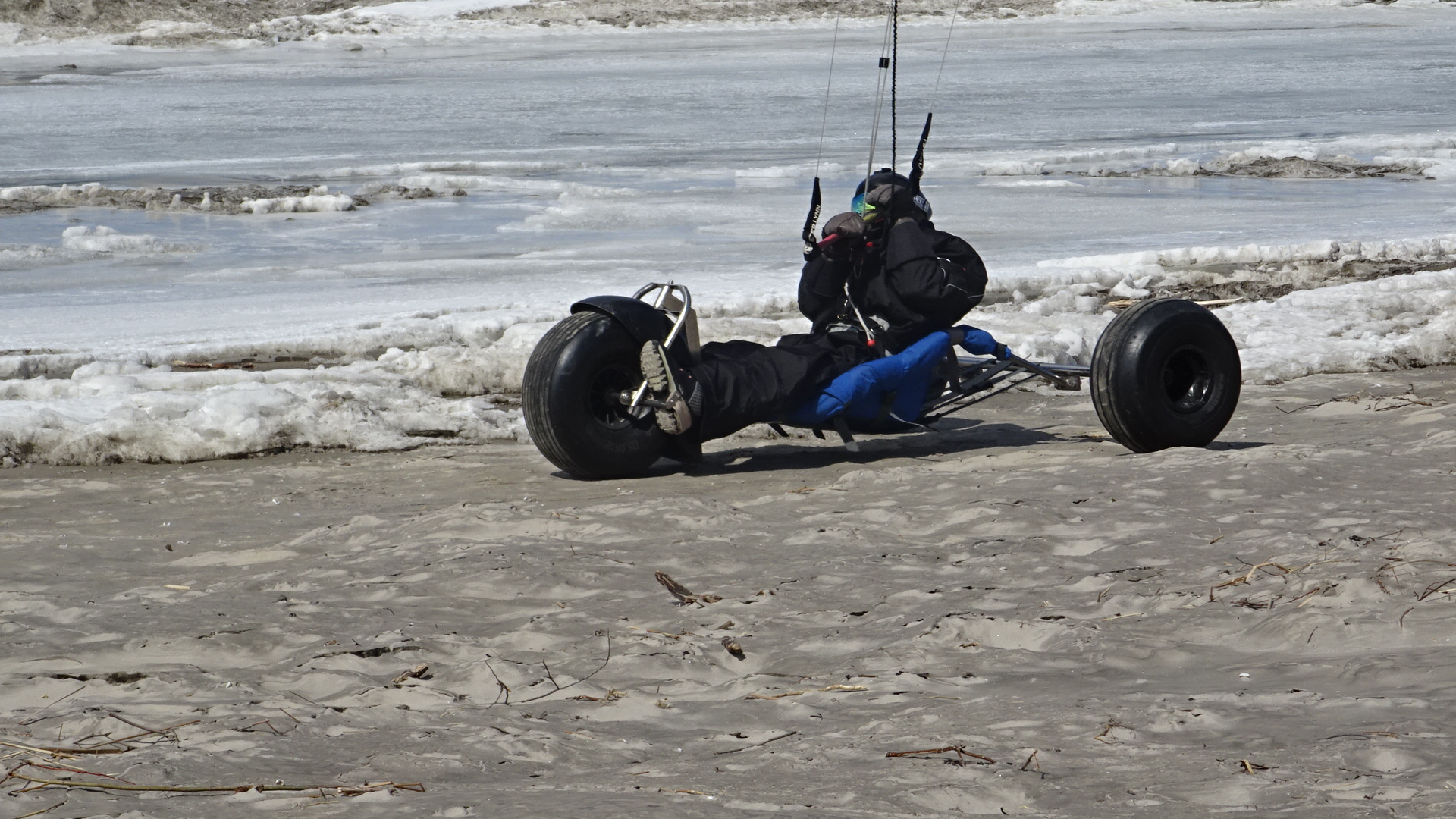 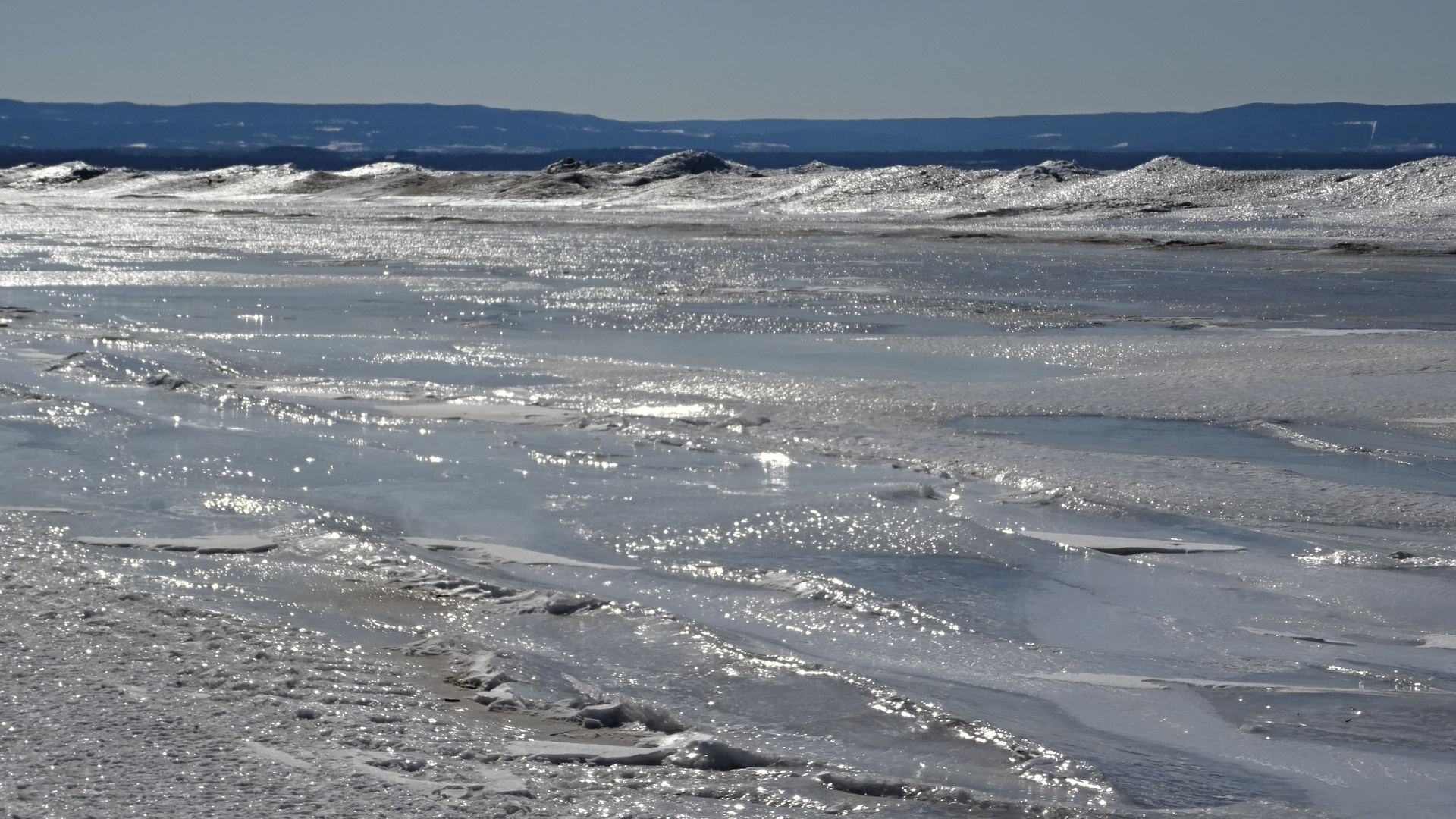 Another wintry week at Wasaga Beach.  I’m afraid the pictures are all starting to look the same! I’m looking forward to Spring and experiencing some different weather.

Things started out cold this week, warmed up towards  weeks end.

This week was cold enough that I walked down the ice  rather than on the exposed sand most days. As far as I can tell inside the ice berms the ice is frozen pretty much to the lake-bed.  With the colder weather the bay was frozen as far as I could see looking from shore, although I wouldn’t dare try and walk out there given how warm things were midweek.

Despite the thickness, the ice is definitely moving.  I heard loud “cracks” in the distance several times while walking along the ice, but failed to actually see any movement take place.  I came across several sections of ice however were obviously open (and thus dangerous) just hours before. This week I decided walking out near the ice berms was no longer safe so I’m done with that for the season. From now on I’m only walking where I know it is shallow.

The picture below taken March 13th is an example. This part of the beach was frozen solid the day before, but you can see it had obviously opened up somehow and then re-frozen.  I have no idea how such major changes can happen day to day.  In places here the ice is only an inch or two thick as you can see from the picture.

The picture below taken looking to the northeast while walking out on the ice looking over the ice berms.

Even though the air is cold is still below freezing you can see the sun when it is out has a dramatic effect warming the sand. The dense snowmobile trails are still there, but the sand almost free of snow.

We had snow squalls most of the day Friday and Saturday with warmer temperatures.  I walked the whole distance on the ice again both days. What a difference a day makes from the bright sunny day Thursday.

The picture below taken March 18th looking west from out on the ice.  The ice berms visible to my right.