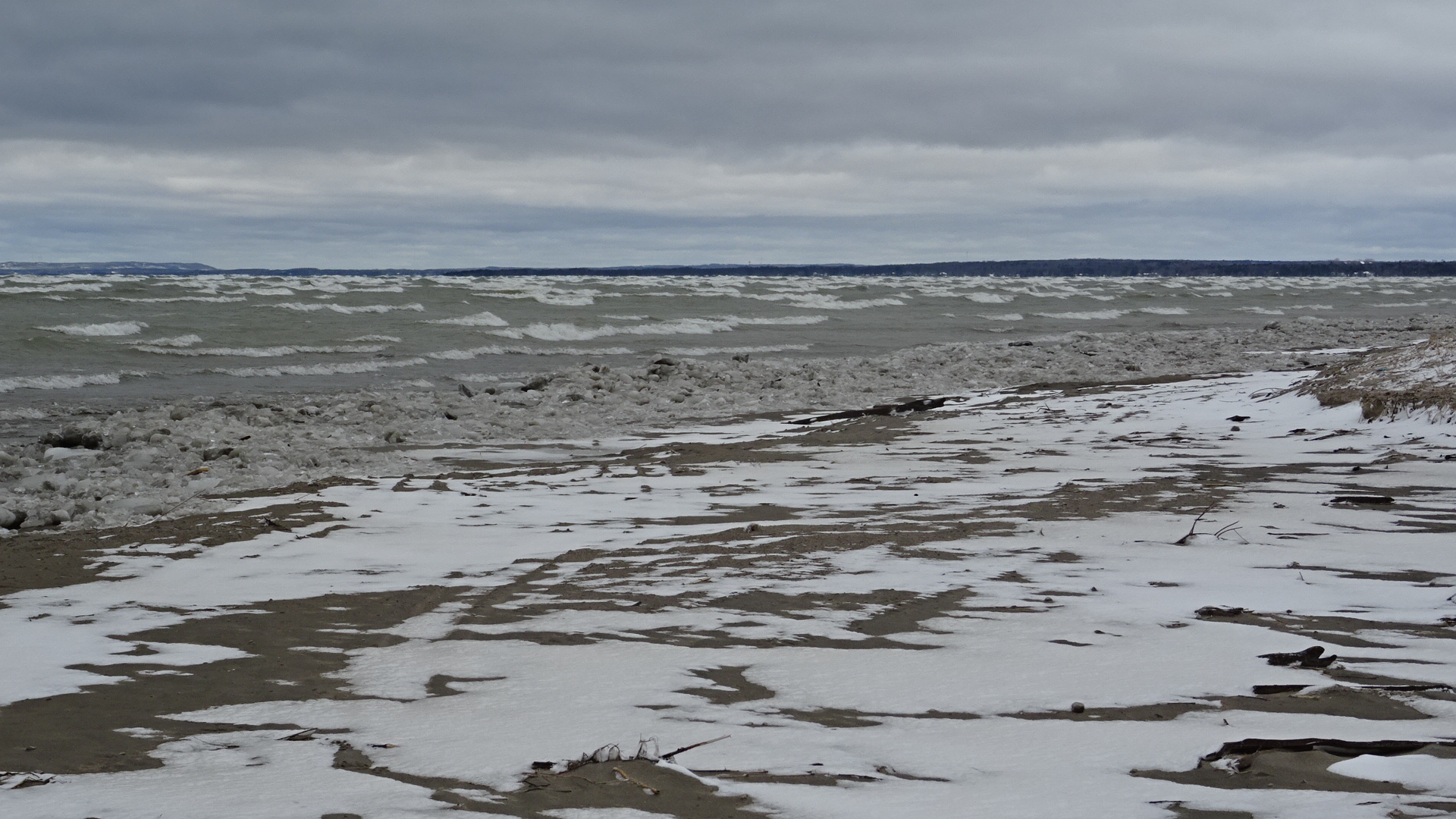 Lots of gray and overcast days the week of April 2nd, but this was the week we officially pivoted to spring and lost the last of the ice.

Despite a snow storm late in the week we had temperatures consistently above freezing. This was one of the more interesting weeks so far because things changed every day.  As a result, I ended up posting more pictures than usual.

In the early part of the week, the ice berms were still hanging in there but spaces had opened between them.  As they melt, the ratio of sand to ice increases and they get more and more “dirty” looking.  They are clearly sitting on the bottom of the lake because they don’t move despite the wind.  Ice continues to come and go depending on the wind. North of us there continues to be a lot of ice no doubt.

Heavy equipment was out most days this week.  You can see below a front-end loader clearing the sand that blew up against the breakwater.  The sheets of plywood that protect the lawns from the worst of the blowing sand are still in place as are the plywood barriers that protect stairs from each property down to the beach.  I’m kind of curious who funds this clean-up – whether it is the provincial park or the residents.  Not that I mind either way.  It’s obviously a big job and expense to clean up after the winter.  They simply spread the sand still mixed with snow in places across the beach as you can see in the foreground.

Being on the water is really hard on properties.  Most homes have shudders or barricade windows with plywood.  Even on the “lee” side of a structure, you can see where the northwest wind can create an eddy effect that results in sand piling up against an unprotected south facing window.

I admire people who manage to have green grass so close to the beach.  While water here is dirt cheap, with all the blowing sand, it is definitely a battle.

With consistent warm weather, the ice is on its last legs.  We’re just one windy day away from losing the last of the ice!

This is the strangest thing below.  I have no idea where these ice chunks came from, but I suspect the wind must have blown then in overnight.  These large “snowballs” were spread the entire length of the beach on April 5th.

So on April 6th we finally got a storm with strong northwest winds.  I had work commitments and needed to be in Toronto all day April 6th so I missed my walk unfortunately.  Before you’re too hard on me for breaking my pledge, I go twice some days. :-).

On April 7th, the winds were still high.  We got some snow and the beach had changed completely. Pictures below.

April 8th was clear.  It took just one windy day to remove the last of the ice. The picture below was taken the morning of Saturday April 8th a clear but cold morning.  The pictures below show the extent of the change in just 48 hours.

We had a bit of a north-west wind again, but you can see the difference between a light wind and seriously high winds.  The beach was completely exposed and easy to walk on April 8th.  The day before, the same section of beach was almost completely underwater and it wasn’t possible to walk on the beach.  (I don’t walk on the grassy part of the beach because there are signs all over warning that the grasslands are a fragile ecosystem)